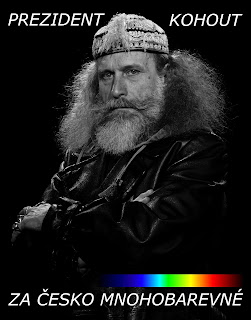 https://en.wikipedia.org/wiki/Czech_presidential_election,_2018
I believe that especially now when we face the extinction of our species on the globe it is necessary that all art must be political. In my understanding there is no division between art, life and politics!!!Therefore I decided absolutely seriously to run for the Czech presidency.
According the Czech public TV I am presented as being among five most considered candidates:
https://www.youtube.com/watch?v=TS6xmBfGttU

Posted by mobius at 4:15 PM No comments:

2015, KISSING THE ROMA IN CHANOV, THE CZECH REPUBLIC 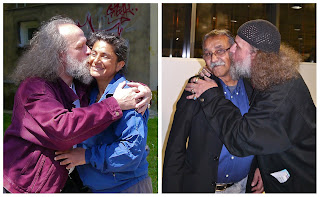 Since the Czech society is predominantly racist I felt always so happy to see the discriminated Roma on the street that I wanted to kiss him or her.

2015, MY ATHEISTIC DNA IS CARIED BY MY SEMEN, WROCLAV, POLAND 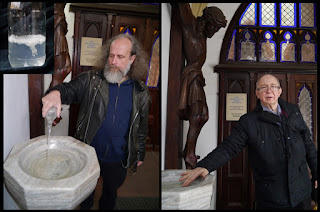 In this performance, I am using very aggressive and invasive tactics, which many of you would consider unscrupulous, deceptive and inconsiderate.
I think that my sperm must carry the genetic information about my militant atheism. It is based on the assumption that thanks to the evolution of our species, atheism is hard-wired into our brains.
I collected some of my sperm, dissolved it in water and then poured the diluted liquid into a holy water (aqua benedicta) vessel in a Polish church.
The water was then used by many Christians to bless themselves when entering the church before attending a huge mass.
I hope that this procedure, in which hopefully the sperm will be absorbed through their skin, will transform them into atheists.

The performance created enormous angry reaction in the polish and czech medias and leading local catholic church official sent a letter of complain to the local art collage where I used to teach and my involvement with this institution was terminated.
The Czech President Milos Zeman commented publicly my performance giving me the advice to use my semen for something more useful.

Posted by mobius at 3:12 PM No comments: 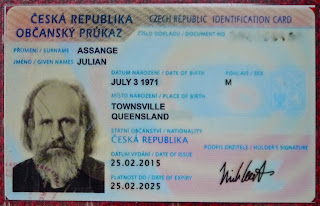 I forged my ID and place there the name of Julian Assange and using it I traveled from Prague to Sweden. It was the act of the civil disobedience and I expected to be arrested by the Swedish authorities since Julian Assange is under arrest there.

The European hypocrisy about the selective application of basic human rights principles is absolutely unbelievable. While teaching other nations about "human rights" (namely China) the Europeans have been keeping Julian Assange, a leading proponent of our human rights, in a jail like situation at the embassy of Ecuador for past three years. It is only because he has been fighting for our human right to know what the fucking 1% of capitalist dictators of our "Western Civilization" are trying to hide from us to keep their power over our lives, and our labor.
Swedish government (a big ass kisser of the US nowadays) is complicit with his jailing, and knowingly is not trying to help him to be released.
Julian Assange (WikiLeaks founder, https://wikileaks.org/index.en.html) is wanted in Sweden for questioning over one count of, definitely politically motivated, and absolutely obviously manufactured,"lesser-degree rape" alleged to have been committed against a Swedish women (the crime he hasn’t even been charged in Sweden- here are more details: https://justice4assange.com/).
Assange has been concerned that If traveling to Sweden for the questioning he would be immediately extradited to The USA where there is "an active, ongoing criminal investigation" into WikiLeaks and Assange under the so called Espionage Act of 1917
In my performance (on the festival of performance in Stockholm http://www.palsfestival.se/) I tried to transplant Julian's identity to me as the act of solidarity with him. I created a fake European ID cart with my picture but Julian's name date of birth, and place of birth. While boarding a plane to Stockholm I used this artefact ID and transplanted name and I entered Sweden under the identity of Julian Assange. Than I went to the different centers of power to give up myself to the Swedish authorities and to accept the consequences of Julian's supposed crimes.
Posted by mobius at 2:41 PM No comments:

2015, HOW WE BECOME HOMELESS IN OUR HOMES, WROCLAV, POLAND 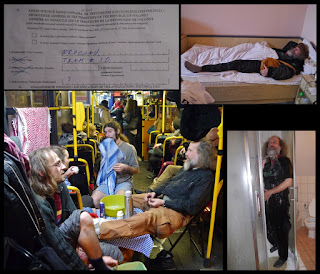 I participated on the symposium "Mediacja W Przestrzeni Publicznej" (http://wroclaw2016.pl/projekty/lokalne/wroclaw-wejscie-od-podworza/)  at the college "Akademia Sztuk Peinych Im. Eugeniusza Gepperta in Wroclaw, Poland" which was dealing with the relationship between private and public space.
With my students Ola Adamska, Wojciech Bartosiewicz and Szymon Gozdz I developed a performance which was based on the fact that we have to create the New definition of private (domestic) and public space (in other words:
how we became (thanks to NSA spying on us)"homeless" in our homes). Nowadays we are forced to behave at home like we are in the public space and in public space like we are at home.
So I registered at the Wroclaw office my permanent address at the local Tram #10 and we moved there and we were trying to create there our new home.

EXCERPT FROM THE ARTICLE:
One, code-named Weeping Angel, uses Samsung “smart” televisions as covert listening devices. According to the WikiLeaks news release, even when it appears to be turned off, the television “operates as a bug, recording conversations in the room and sending them over the internet to a covert C.I.A. server.”

Posted by mobius at 2:09 PM No comments: 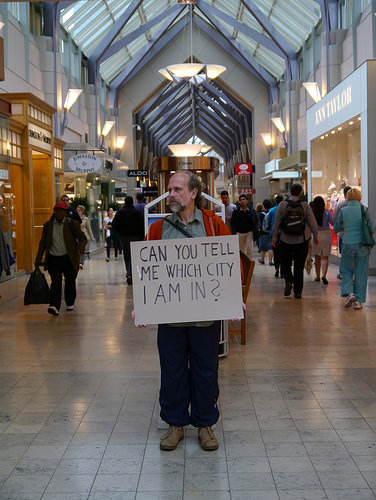 Email ThisBlogThis!Share to TwitterShare to FacebookShare to Pinterest
Labels: 2014


Since the apartments of the miners from Ostrava region were stolen by capitalist Bakala during the "privatization process" and privatization is a "mantra" leading to a contemporary "freedom" and the miners lost their jobs in this process so I decided to suggest the privatization plan for the city Ostrava and I would offer for it a very lucrative object and would be my own body.
Posted by mobius at 6:55 AM

Performance- "Vecna Performerka”
The textbook about the history of Performance Art
Written by Milan Kohout
Published by The University of Ostrava, Czech Republic, 2014
PERFORMANCE – „Věčná performerka.pdf